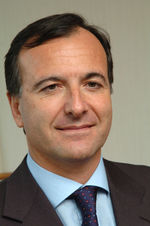 European Commission Vice President Franco Frattini said Thursday that the EU would help the Croatians recruit and train border guards and to develop a "comprehensive strategy" for fighting organized crime.

After a meeting with Croatian Interior Minister Ivica Kirin, Frattini said he would ask EU member nations to conclude an agreement between Croatia and the EU's anti-narcotics agency to improve cooperation against drugs smugglers.

Croatia opened formal membership talks with the EU in October and hopes to wrap them up in 2009.

The talks opened with EU screening of Croatia's legislation to check its compatibility with EU laws. Frattini said he hoped the screening could be wrapped up in the justice and security areas by the end of the year, to allow for the start of detailed membership negotiations early in 2007.

"We intend to speed up the process paving the way to start concrete negotiations," Frattini told reporters.

Kirin said he hoped the Croatian parliament would quickly ratify an agreement with the EU police agency Europol to allow easier sharing of information.

The northern neighbors of Croatia - Hungary and Slovenia - joined the EU in 2004.