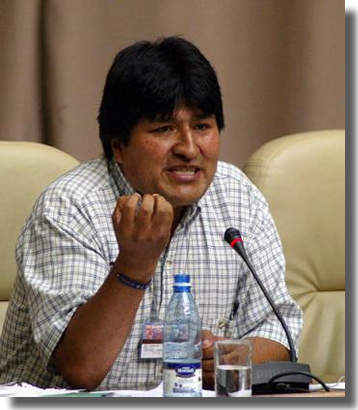 "There are companies in Bolivia that don't respect Bolivian laws. They have betrayed our country," Morales told a news conference at a European Union-Latin American summit in the Austrian capital.

Morales, who on May 1 announced that Bolivia would nationalize its gas and energy sectors and gave foreign firms six months to negotiate new contracts, also claimed Bolivian ownership of foreign assets and investments.

Foreign oil firms have invested more than US$3.5 billion in Bolivia since 1996, including more than US$1.5 billion from Brazil's state-run oil firm, Petroleo Brasileiro SA.

Morales said he would expand nationalization plans to include agricultural land holdings as well, particularly Brazilian farmers with large landholdings in eastern Bolivia.

"We are defending the right of our indigenous peoples to their own resources," he said, saying the Bolivian people would become the main beneficiaries of the country's natural resources, not big business.