Vuk Draskovic spoke in Vienna, Austria, amid claims by Serbia's former secret service chief that the search in Serbia for the wartime Bosnian Serb army commander is "a farce and a circus." 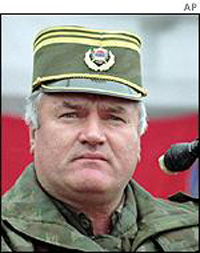 "There is no excuse or apology for the fact that Mladic up to now has not been delivered to the (U.N. war crimes) tribunal in The Hague," Draskovic told the Vienna-based Organization for Security and Cooperation in Europe. "It is too late for explanations."

Draskovic said Serbia-Montenegro was "now paying the tragic price for mistakes" made after Milosevic was toppled in October 2000, such as the country's failure to immediately reshuffle its secret services and purge the ranks of Milosevic loyalists.

"Instead of arresting Mladic, we have an entire nation that's being held hostage," Draskovic said.

The European Union suspended pre-membership talks with Serbia after Belgrade failed to meet an April 30 deadline to hand over Mladic to the war crimes tribunal in The Hague, Netherlands.

Draskovic said he still expected Mladic to be captured soon, adding: "I am convinced that Mladic cannot be an obstacle for my country, which is traditionally part of European civilization."

However, Serbia's former secret service chief, Goran Petrovic, said that the alleged search for Mladic is "a farce and a circus."

Petrovic told the Gradjanski List newspaper that if the state security services was serious about arresting the fugitive general, their actions would not be public and announced in advance.

"If they really wanted to find him, they wouldn't be announcing when and where they arrested his aides, or be saying which places they searched to find him," Petrovic, who headed the secret service following the 2000 ouster of Milosevic, said.

In what they claim are stepped-up efforts to hand Mladic over to the U.N. war crimes tribunal, authorities over the past two months have arrested 10 people accused of helping Mladic.

Last week, masked police backed by helicopters searched a western Serbian town and a week ago, police sealed off a Belgrade neighborhood and searched several houses, the AP reports.