Iran's president intensified his attacks against Israel on Thursday, calling it a "a tyrannical regime that one day will be destroyed," but also said he was ready to negotiate with the United States and its allies over his country's nuclear program. 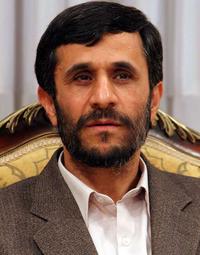 Mahmoud Ahmadinejad, who has previously said Israel should be wiped off the map, told cheering crowds of students in the Indonesian capital that it was every country's right, not just the United States, to use new technology to meet energy needs.

He said his nation was willing to negotiate, but that the United States first must drop its "bad attitude."

"There are no limits to our dialogue," Ahmadinejad earlier told Metro TV station. "But if someone points a weapon at your face and says you must speak, will you do that?"

The Iranian leader, known for his fiery rhetoric, is visiting the world's largest Muslim majority nation amid a deepening standoff over his own country's nuclear program and suspicions it is developing nuclear weapons.

This week, key U.N. Security Council members agreed to present Tehran with a choice of incentives or sanctions in deciding whether to suspend uranium enrichment, a move that will delay a draft U.N. resolution that could lead to economic sanctions and possible military action.

The Iranian leader brushed off the threat, saying the West had more to lose than Tehran did if it was internationally isolated. Sanctions would serve only to "motivate" the country's nuclear scientists, he said.