Russia won agreement Thursday from a majority of Paris Club governments to begin talks on the reimbursement of its entire US$22 billion ( Ђ 17.22 billion) debt to the 19-member group of creditor nations. 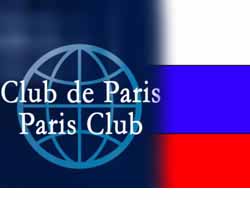 Negotiations will start in June, the Paris Club said in a statement, after "a majority of creditors" agreed in principle to Russia's proposal.

Russia has been taking advantage of soaring revenues from oil exports to improve its balance sheet and pay off foreign debt.

The final decision on whether to accept Russia's repayment offer would be taken by the individual creditor governments, the statement said.

It was not immediately clear which creditors had accepted Moscow's offer in outline, or whether Germany, which holds about US$9 billion ( Ђ 7 billion) in Russian Soviet-era debt,  was among them.

Germany took part in a previous Russian debt buyback deal that went ahead last year at face value, without an extra premium paid by Moscow for early repayment.

But German officials had suggested that any further buyback would have to include a premium, essentially a financial penalty for early repayment. The Paris Club did not specify whether Thursday's agreement included a premium.

Apart from Germany, Russia's largest creditors in the Paris Club are Italy, the United States and France.

Algeria, like Russia, is seeking to use accumulated oil revenues to cut its debts, and is expected to reach a deal with the Paris Club on Thursday to pay off its US$8 billion ( Ђ 6.3 billion) in outstanding debt, reports the AP.