German Chancellor Angela Merkel called for a "new foundation" for the European Union, a fresh beginning that convinces ordinary people that further integration and expansion benefits them. 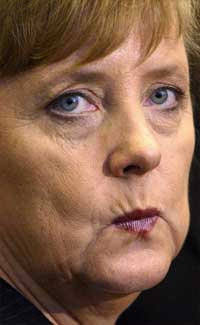 "We must put the citizens first," she said during a speech on European integration to German parliament. It must be clear to people "that Europe makes things better, or is it a stumbling block."

Some people have doubts about the superiority of Europe's welfare state economies, and "that is the great challenge before which we stand," she said.

She reiterated her support for a new European constitution, which has stalled after being rejected in referendums in France and the Netherlands.

Merkel seemed to endorse a reference in any European constitution to the continent's Christian roots, a controversial idea rejected by the drafters of the recent failed proposal.

"I believe that in the exchange with other religions, with other cultures, that it's important for Europe to clearly specify its roots. Others expect that of us," she said.

Merkel said Bulgaria and Romania, set to enter the EU in 2007 or 2008, would "clearly" become members, but added that membership talks were a "two-way street" and that potential new members such as Croatia or Turkey would have to meet all requirements.

"The conditions must be fulfilled... that goes for Croatia as well as Turkey," she said.