Hugo Chavez to meet with pope at the Vatican

Pope Benedict XVI was scheduled to meet Thursday with Venezuelan President Hugo Chavez for talks expected to focus on the issue of poverty and how to improve relations. 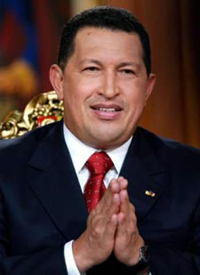 Hugo Chavez to meet with pope at the Vatican

"First of all I will ask for his blessing, then I will talk about world poverty," Chavez was quoted as saying in Italian newspapers Corriere della Sera and Repubblica on Thursday.

The church has been one of the most critical voices against the leftist leader, who has in turn called the church leadership a "tumor." Some Catholic leaders have expressed concern the president may be accumulating too much power.

More than 90 percent of Venezuela's population is Roman Catholic, and church leaders and local priests wield tremendous influence over many of its citizens.

Chavez, who is on a visit to Europe and North Africa, arrived in Italy on Wednesday and met with the Communist speaker of Italy's lower house of parliament, Fausto Bertinotti.

The Venezuelan leader's next stops are Vienna, Austria, for a summit of Latin American and European leaders, Britain, Libya and Algeria, reports the AP.