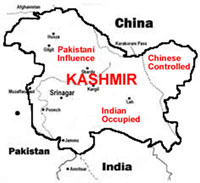 The masked assailants fled after the attack in Soura neighborhood of Srinagar, the summer capital of India's portion of Kashmir, police officer Ali Mohammed said.

No one claimed responsibility for the attack.

Police cordoned off the area and launched a search for the attackers.

Nearly a dozen rebel groups have been fighting for Kashmir's independence from India or its merger with neighboring Pakistan since 1989. More than 66,000 people have been killed in the conflict.

They target government soldiers as part of their campaign, reports the AP.