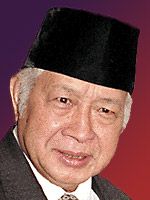 "God willing, the attorney general will soon issue an order declaring the investigation over," Mahendra said after visiting Suharto, who is in a Jakarta hospital recovering from surgery to stem intestinal bleeding.

Mahendra, a former speech writer for Suharto, has been tasked by the president to collect documents relating to Suharto's legal, financial and health status ahead of a decision on how to handle Suharto's case, reports the AP.