Keith Richards of the Rolling Stones was discharged from a hospital inNew Zealand on Thursday following surgery to relieve pressure in his head following a fall, his publicist said. 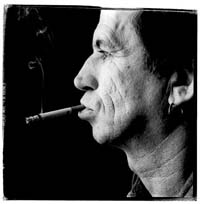 Fran Curtis said in a brief statement that Richards would remain an outpatient at The Ascot Hospital in Auckland and would return for checkups.

Richards suffered the injury on April 27 in Fiji. News reports have variously claimed that he fell out of a palm tree or from a jet ski. It was unclear how long Richards would remain an outpatient and Curtis could not immediately be reached for comment.

The Stones' "A Bigger Bang European" tour, which was scheduled to start in Barcelona, Spain, later this month, will be postponed until June, London-based publicists LD Communications said earlier this week.

In a statement released by the hospital, Richards thanked staff for the care he had received.

"From the doctors to the beautiful ladies who make painful nights less painful and shorter. I'm pretty much at a loss for words to express my deep gratitude," said the statement, which the hospital received from the star and then released to the media.

"I hope I wasn't too much of a pain in the arse, after all it was my head they fixed. Many thanks, Kiwis," the statement said, reports the AP.