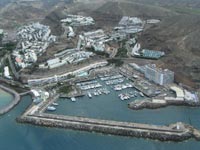 Gov. Anibal Acevedo Vila said he and the leaders of the Puerto Rico's Senate and House of Representatives had agreed to a budget plan formulated by a special commission created Monday to resolve the bitter divide between the governor and the opposition-dominated legislature.

The agreement, Acevedo said, would allow Puerto Rico to secure a US$740 million ( Ђ 579 million) loan to pay government salaries for the rest of the fiscal year, which ends June 30.

But the governor declined to say how the commission and lawmakers had agreed to resolve the dispute over how to repay the loan and whether that includes the island's first sales tax, a measure that had been at the center of the debate.

Acevedo said only that the repayment would come through a series of measures, including some that had not yet been passed, and that he and the legislative leaders would finalize details of the plan Thursday at a meeting with San Juan Roman Catholic Archbishop Roberto Gonzalez Nieves.

Other members of the commission also declined to disclose details of the accord.

"I think the lawmakers, who are sensible people, came to realize that there is a time when it's necessary to set aside differences," said Antonio Negron Garcia, a former Puerto Rican Supreme Court judge who moderated the commission's discussions.

Acevedo said that the government would resume normal operations on Monday, ending a crisis that had to temporarily shuttered 43 agencies and nearly 1,600 public schools two weeks before the end of the academic year.

The partial government shutdown, which was in its 10th day on Wednesday, had furloughed more than 95,000 workers and given an unexpected holiday to some 500,000 students.

It also hurt businesses such as restaurants and hotels and pushed New York-based Moody's Investors Service to cut the rating of the territory's general obligation bonds to one notch above junk status, affecting about US$25 billion ( Ђ 20 billion) of government debt.

Before the partial shutdown, Moody's and Standard & Poor's, another major credit rating agency, had warned that the government had to collect more money and reduce expenses to make its bonds more attractive to investors, reports the AP.