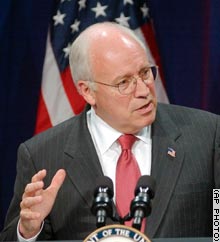 At a news conference, Cheney also shrugged off Russian criticism of a speech he delivered Thursday that accused Russian President Vladimir Putin of backsliding on democracy and using energy resources as political leverage against European countries.

He said Washington is working with others to try to find a "diplomatic solution to avoid a confrontation over this issue."

With Nazarbayev standing a few feet away, Cheney added, "I frankly think that the example provided by Kazakhstan some years ago when they achieved independence, of giving up the inventory of nuclear weapons that were deployed in Kazakhstan, was an outstanding example that the Iranians might want to consider."

Cheney said he hadn't yet had the chance to "study the reaction out of Moscow" from Thursday's speech.

Cheney said that even with his remarks, he expects a meeting of the world's industrialized nations to occur as scheduled in Russia this summer, and "we'll all benefit from a free, open and honest exchange of views at that conference."

Nazarbayev, whose country shares borders with both Russia and China, betrayed no concern about the sharp rhetoric. "Every country has the right to voice their opinion about what is happening in another country and if they'll just do that in a friendly fashion we'll all benefit from it," he said.

Cheney arrived for talks seeking to maximize access to the vast oil and gas reserves in the central Asian nation with a troubled human-rights record.

He became the fourth top administration official to visit the former Soviet republic in recent months, underscoring the importance placed on a country that is strategically located and an ally in the war on terror, as well as rich in energy resources, the AP reports.