Turkey banned the sale of energy drinks with more than 150 milligrams of caffeine per liter, a notice published in the Official Gazette said Wednesday. The ban was first introduced by the Agriculture Ministry in 2002 because of health concerns about high caffeine levels and had been expected to go into effect in January of 2007, giving firms time to comply with the new requirements. 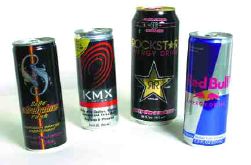 NTV television said the ban went into effect nearly nine months early as a result of government negotiations with major energy drink producer Red Bull, which changed its production formula to comply with rules in Turkey and wanted to pre-empt new competitors.

Red Bull normally contains about 330 milligrams of caffeine per liter. The Austria-based company sponsors parties and events across Turkey , and its energy drinks are sold at stores and are popular at bars here. A 2002 European Union directive requires beverages with more than 150 milligrams of caffeine per liter except tea and coffee to carry a "high caffeine content" label, according to beveragedaily, an online beverage industry publication, reports the AP.