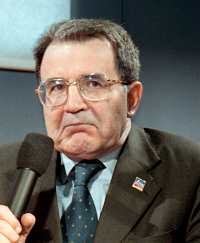 The lower and upper chambers opened with a minute of silence in honor of the victims of Thursday's bombing in southern Iraq in which three Italian soldiers and one Romanian were killed. One Italian soldier was also seriously wounded.

Prodi's main challenge is in the Senate, where his margin is tighter than in the Chamber of Deputies.

His candidate for Senate president, Franco Marini, a centrist and former labor leade, is up against former Christian Democrat premier Giulio Andreotti, the nominee of outgoing Premier Silvio Berlusconi's coalition.

Several rounds of balloting are expected before a winner is declared.

The last time Parliament convened was before the April 9-10 election.

Prodi, who made an appearance at the Chamber of Deputies, appeared relaxed and joked with reporters.

"All is well, all is well. The first day of school is always a party," Prodi told the ANSA news agency. In a news conference a day earlier, he was hopeful that his "majority would be solid" and stay compact.

His candidate Marini, 73, is a former leader of one of Italy's major labor confederations that has traditionally been supported by Christian Democrats. Andreotti, 87, was longtime leader of the Christian Democrats when they dominated politics in Italy for decades after World War II until corruption scandals toppled them from power.

Although Prodi's center-left coalition has the numbers to get Marini through, there is the danger that some of those lawmakers could defect to Andreotti in the secret ballot. Any such defection would seriously shake Prodi's coalition, which already has shown signs of fraying over which politician gets which post under his tenure.

Marini acknowledged that he was facing a "difficult" battle, the Apcom agency reported, reports the AP.