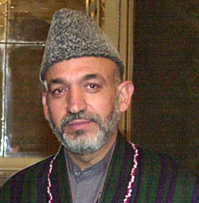 Karzai again blamed "outsiders" for fanning his country's insurgency, which he said claimed the lives of Afghans of all walks of life, from innocent teachers to police and Taliban extremists.

"I want them (the Taliban) to return to us with their guns and to serve their countrymen," Karzai said during a military parade marking the 14th anniversary of the mujahedeen victory over the communist government, which was followed by a bloody four-year civil war.

Remnants of the former Taliban government, which was toppled by a U.S.-led invasion in 2001, and other militants, have been stepping up attacks against Afghan security forces and U.S.-led coalition troops in recent months.

"After the Taliban's reign ended, normal life started but the enemies of security and peace continued interfering and they are killing the engineers, elders and educated, destroying schools and madrassas (religious schools), and killing Afghans whether they be the Taliban, police or innocent," Karzai said.

"This is the plan of the outsiders for the killing of Afghans."

The parade was held without any security concerns, despite an Australian government warning Thursday of a high threat of terrorist attacks in the Afghan capital during the celebrations.

Thousands of soldiers and policemen marched past Afghan dignitaries led by Karzai as Afghan helicopters hovered nearby and troupes of men performed a traditional war dance.

Hundreds of former "holy warriors" who first battled the Soviets during the 1979-89 occupation of Afghanistan and then the communist government for three more years also filed past a clapping Karzai.

The parade passed by bomb-ravaged buildings in the southeastern quarter of Kabul, the scene of fierce fighting during the civil war that killed an estimated 50,000 people and followed the mujahedeen's 1992 toppling of the communist government, reports the AP.