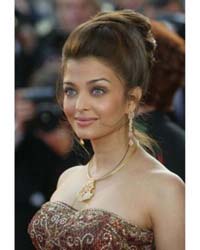 Rai is one of India's biggest stars, a former Miss World and features in international ad campaigns for leading cola and cosmetic companies.

She told Bombay-based DNA newspaper she was a little like Tilo, a character she plays in the just released "Mistress of Spices," about a shop owner trained in the art of healing with spices.

"I believe there is a small part of every character inside each actor who portrays it. I'm really a simple girl at heart, like Tilo," she said.

Largely shot in Oakland, California, the movie stars Rai and American actor Dylan McDermott, best known as crusading lawyer Bobby Donnell on ABC's "The Practice." The movie is about a woman who could lose her magical powers if she falls in love.

Rai, who has been romantically linked to several Bollywood actors by the Indian media, said people need to be lucky to find love.

"If you are blessed in this lifetime, you'll find 'true love,"' she said. "There are many different levels of love, one can experience all or just one kind."

She says she misses home while traveling to film her movies, "I do miss home, my family, friends and dog, but I'm a happy person regardless of my geographic location."

Her movies that will release later this year include a classic story "Umrao Jaan" about a woman kidnapped and sold into a brothel, reports the AP.