The sister of former Colombian President Cesar Gaviria was killed in a botched kidnapping that shocked this South American nation and underscored fears of violence a month before national elections. 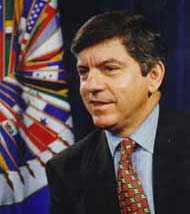 Liliana Gaviria, 52, a real estate agent and owner of a transport company, was killed late Thursday by unknown assailants in the province of Risaralda, 110 miles (175 kilometers) west of Bogota.

Authorities have launched a massive operation in the zone in an attempt to capture the responsible.

Cesar Gaviria was president of Colombia between 1990-1994, before becoming secretary general of the Organization of American States. He currently leads the main opposition party, the Liberals.

"It pains us. It pains us greatly that such crimes occur," said President Alvaro Uribe, announcing a $430,000 ( Ђ 346,000) reward for the capture of those responsible. "The government will do all in its power to make sure this crime doesn't go unpunished."

Between four and eight armed men intercepted Gaviria as she arrived at her home with her security detail in the city of Pereira. In the ensuing shootout, one of her bodyguards was killed and two of the kidnappers were injured, said Uberney Marin, mayor of the city.

Gaviria's body was found about 15 minutes after her abduction with two gunshot wounds.

The killing of Gaviria was a shock for the country with regular programing on radio and televsion interupted to announce the news. The webpage of the Liberal party had a picture of the slain woman under the title "One day there will be peace in Colombia".

Colombian elections have traditionally been marked by violence as leftist rebels, far-right paramilitaries and drug-traffickers attempt to assert influence.

Despite a widening corruption scandal, Uribe continues to hold a commanding lead in polls ahead of the May 28 election. Voters appear to approve of his dogged pursuit of leftist rebels, which is credited with a dramatic drop in kidnapping and politically motivated homicides.

Cesar Gaviria's political career has been framed by the violence that has gripped Colombia for decades, reports the AP.