Former rebels in tsunami-ravaged Aceh province said they hoped to form a political party soon so they could participate in local elections for governor later this year. 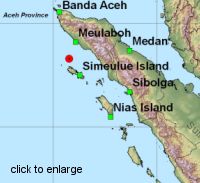 "We do not need to use weapons any more," said Abdullah, who returned to Indonesia earlier this month following nearly 30 years in self-exile. "Now we will fight through political channels."

Efforts to end the 29-year war in Aceh picked up pace after the Dec. 26, 2004, tsunami crashed into the province's coastlines, killing at least 130,000 people and leaving a half million others homeless.

The government and the rebels, saying they did not want to add to people's suffering, returned to the negotiating table ready to make concessions.

The Free Aceh Movement, or GAM, gave up its long-held demand for independence and Jakarta agreed to give the oil-and-gas rich province self-government and control of 70 percent of its natural resources.

So far the peace process has gone better than almost anybody dreamed. The rebels have handed over all of their weapons and the government has pulled more than half its troops out of the province on the northern tip of Sumatra island.

But, despite a March target date, parliament has yet to pass legislation allowing GAM to form a political party so it can take part in gubernatorial elections now slated to be held in early August.

Vice President Jusuf Kalla assured the former rebel leaders Thursday that the peace process was on track and that they would be allowed to take part in upcoming polls, reports the AP.