South Korea has no plan for summit with Japan

South Korea's Foreign Ministry on Friday ruled out a summit between President Roh Moo-hyun and Japan's Prime Minister Junichiro Koizumi any time soon, days after Koizumi called for such a meeting. 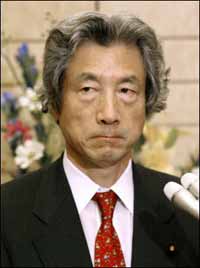 South Korea has no plan for summit with Japan

"We don't have such a plan for now," Deputy Foreign Minister Yun Byung-se told The Associated Press without elaborating.

On Tuesday, Koizumi called for the summit to try to repair the relations strained by the latest standoff over a string of disputed islets, known as Dokdo in Korean and Takeshima in Japanese.

The long-running dispute flared anew this month when Japan said it would conduct a maritime survey in waters surrounding the rocky outcroppings that are under South Korean control, but also claimed by Japan.

Roh lashed out at Japan on Tuesday, saying Japan's claims to the islets were a rejection of the sovereignty of South Korea, which was under Japanese colonial rule in 1910-45.

Under a deal reached last weekend, Japan agreed to cancel the survey as long as South Korea delays its plan to officially register Korean names for underwater physical features in the area.

A Japanese negotiator, however, said later that Tokyo would go ahead with the survey if South Korea made another attempt to register the Korean place names.

Negotiators were expected to meet as early as next month to talk about demarcating their maritime boundaries.

Roh and Koizumi have met twice since 2004 under what officials dubbed a "shuttle summit." Roh canceled a trip to Japan in December due to Koizumi's visit to a war shrine, which critics consider a glorification of Japan's past militarism.

In December, South Korea also canceled a customary meeting with Japan on the sidelines of a regional summit, a snub meant to protest Koizumi's visit to the shrine in October, reports the AP.