Abbas to propose new talks after government formed in Israel 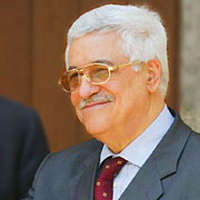 Abbas to propose new talks after government formed in Israel

Palestinian President Mahmoud Abbas on Thursday said he would contact Israeli leaders with an offer to restart peace talks after they form a new government.

"I think after the establishment of the Israeli government, we will make an initiative to the Israelis to return back to the negotiating table," Abbas told reporters in the Finnish capital, Helsinki. "We hope that they will be positive."

Israel's centrist Kadima Party, which did not win enough parliament seats in the March election to rule alone, moved a step closer toward forming a government Thursday. The party, led by Interim Prime Minister Ehud Olmert, said it would sign a coalition deal later Thursday with the center-left Labor Party, reports the AP.