Bomb blast rocked an Italian convoy at a base in southern Iraq on Thursday, killing four people and seriously injuring a fifth, the Defense Ministry said in a statement. Italian news agency reports said many more were injured. 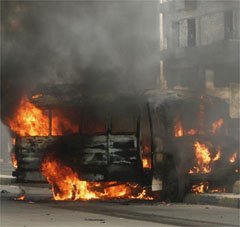 The bomb targeted a four-vehicle convoy on its way to relieve troops at the local Iraqi police station in the city of Nasiriyah, the statement said. One of the vehicles was destroyed, killing four people on board and gravely injuring a fifth passenger.

The Italian news agency Apcom, citing government sources, reported that there were many more injured.

The vehicle hit was carrying four members of the Italian military police and a Romanian soldier belonging to the multinational force, the Defense Ministry statement said. The ministry said those killed were three Italians and the Romanian soldier.

More than 2,000 Italian troops are stationed in Nasiriyah, reports the AP.