The grieving relatives of an Australian soldier killed in Iraq were distressed to learn that the wrong body was accidentally sent home in his place, the defense minister said Thursday. 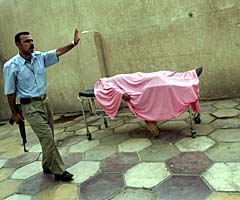 He was the second soldier with Australian citizenship to die in Iraq since the U.S.-led war began in 2003, but he was the Australian military's first casualty.

Kovco was due to be buried near the southern city of Melbourne with full military honors, but the casket that arrived in Australia early Thursday contained the wrong body, the Defense Department said in a statement.

"Needless to say the Kovco family were quite distressed," Nelson told reporters in Melbourne.

He said Kovco's wife, Shelley, spoke to Prime Minister John Howard by telephone and "expressed her disappointment and distress that her husband's casket had not been dispatched to Australia."

Nelson said a private mortuary in Kuwait appeared to be responsible for the mistake, and that the Australian government was investigating how Kovco's coffin was swapped for another.

"It's shocking. It's a disgrace. The government and the Australian army should be ashamed of themselves," he told Southern Cross radio. "John Howard, you're nothing but a shocker."

Earlier in the day, Nelson denied reports that the 25-year-old soldier had shot himself while cleaning his gun, reports the AP.