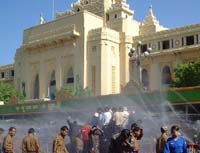 Myanmar troops have uprooted more than 11,000 Karen civilians in their biggest offensive in almost a decade, a campaign punctuated by torture and killings, according to reports from inside the country and Thailand.

Troops in eastern Myanmar have torched Karen villages and sent inhabitants fleeing into jungles in a campaign to suppress a decades-old insurgency, say reports from Free Burma Rangers, a group of Westerners and ethnic volunteers who provide aid to displaced people in the country, formerly known as Burma.

Tom Lantos, the top Democrat on the U.S. House International Relations Committee, said the attacks were a "deadly escalation of what is already one of the world's most serious humanitarian disasters."

"The Burmese military junta must call off its campaign against innocent civilians," he said

He called on the U.N. Security Council to follow up on its debate last December on Myanmar with a binding resolution aimed at stopping the violence. "The longer the Security Council waits, the more villages will be destroyed and more people will die," he said.

Some 11,000 people have fled their homes due to the onslaught, which began last November and has recently intensified, the Free Burma Rangers said. About 1,500 refugees have fled across the border to Thailand, and aid officials fear others will follow in coming months to swell the more than 140,000 already in Thai refugee camps.

Another congressman, Republican Joe Pitts, said the latest reports suggest the junta was actively hunting down more than 2,000 of the displaced.

"The thugs of Rangoon are on a violent rampage," he said.

A leading British human rights advocate and House of Lords member, Baroness Caroline Cox, described the offensive as "the latest atrocities in a long litany of crimes against humanity" by the junta.

The military-run government has denied any human rights violations against ethnic minority groups, including the Karen, which it blames for a spate of recent bombings in the country.

"There is no offensive against the Karen National Union but security measures have been taken and cleaning-up operations are being conducted in some areas where (KNU) terrorists are believed to be hiding," Information Minister Brig. Gen. Kyaw Hsan told reporters in Yangon earlier this month, referring to the main Karen rebel group, reports the AP.