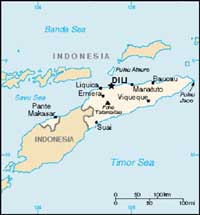 Those involved in the rampage included a group of nearly 600 soldiers who were fired earlier this month after staging a strike to protest working conditions and promotion rules.

The dismissals were a serious blow to the country's 1,600-strong defense force, which was set up after East Timor voted for independence from Indonesia in 1999.

Most of the soldiers came from the ranks of the East Timorese resistance to Indonesian rule.

It was the third day of demonstrations in Dili.

Martins said dozens of former soldiers broke away from the rally and started throwing stones at stores and buildings, and attacking stalls at a local market with sticks.

The extent of the damage was not immediately clear.

The situation had returned to normal by Wednesday afternoon, but hundreds of police from nearby towns had been called in to help safeguard Dili, Martins said, reports the AP.