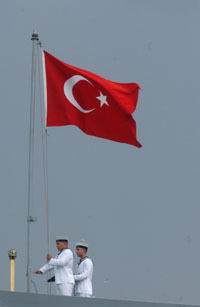 A Turkish freight ship carrying fertilizers sank in the sea of Marmara, maritime authorities said Wednesday. Four crew members were rescued but five others, including the ship's captain, were missing.

The "Haci Ibrahim" was transporting 1,250 metric tons (some 1,400 U.S. tons) of fertilizers to the Black Sea port of Samsun when it went down late Tuesday off the coast of Armutlu in the Marmara Sea, near the entrance to the Bosporus.

The cause of the accident was under investigation but authorities were looking into the possibility that the vessel may have collided with a tugboat that was assisting another ship that had broken down nearby, reports the AP.