Azerbaijani President Ilham Aliev arrived in Washington, where Iran, energy supplies and the nearly two-decade-old conflict over his country's ethnic Armenian-dominated Nagorno-Karabakh enclave were expected to top the agenda during his visit. 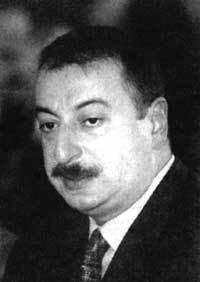 Azerbaijan has sought to carefully balance its aspirations for closer cooperation with the United States with Russia and its volatile neighbor Iran. Now the nation of 7.9 million faces the question of whether it should join in pressuring Tehran to abandon its alleged nuclear arms program, a topic certain to come up in Aliev's White House meeting with U.S. President George W. Bush later in the week.

For his part, Aliev will be looking for the United States to pledge to put more pressure on Armenia to make concessions in the 18-year-old Nagorno-Karabakh conflict. At least 30,000 people were killed and 1 million made refugees during six years of war that ended with a shaky cease-fire in 1994. Ethnic Armenian forces occupy the enclave inside Azerbaijan.

The United States, together with Russia and the Organization for Security and Cooperation in Europe, is trying to mediate a resolution.

U.S. criticism of Aliev's domestic policies has been muted, due in large part to Baku's role in supplying the West with Caspian Sea oil through the Baku-Tbilisi-Ceyhan pipeline. The first shipments are due this June, and in the fall the new Baku-Tbilisi-Erzerum gas pipeline will provide a new source of energy for the Turkish market.

Azerbaijani opposition leaders worried that the Iran issue, too, had pushed rights concerns further down the U.S. list of priorities. Foreign observers said last fall's parliamentary elections, as well as the 2003 election that cemented Aliev's grip on power after the death of his father Geidar Aliev, did not meet international standards.

"We understand that today, the question of Iran is more important than the problem of Azerbaijan's democratization," Sardar Jamaloglu, deputy head of the Democratic Party of Azerbaijan, said Tuesday, reports the AP.