In a show of support for Iraq's emerging government, U.S. Defense Secretary Donald H. Rumsfeld arrived in the capital unannounced Wednesday for meetings with Prime Minister-designate Jawad al-Maliki and other newly selected leaders. 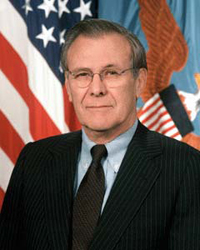 Rumsfeld, who flew overnight from Washington after a private meeting on Capitol Hill with a group of Republican senators. The defense secretary also was holding talks here with Gen. George Casey, the top U.S. commander in Iraq, and other senior commanders to discuss progress on the military front.

Rumsfeld was expected to not only congratulate the Iraqis on breaking a deadlock over selection of a prime minister and other top political positions, but also to reinforce the Bush administration's message that the Iraqis should not expect U.S. forces to remain indefinitely.

Casey had said last year that if the insurgency did not worsen and the Iraqis remained on track toward establishing a government of national unity, then fairly substantial reductions in the U.S. troop presence were likely this spring and summer. So far, the total has been reduced only slightly, from about 138,000 to about 132,500. No further cuts are scheduled.

Rumsfeld's press secretary, Eric Ruff, told reporters aboard the defense secretary's flight from Washington that Rumsfeld's trip was designed to convey President George W. Bush's encouragement at the latest steps toward putting in place Iraq's first fully constitutional government since the fall of the Saddam Hussein regime three years ago.

"The president asked us to go and show support for their new government," Ruff said.

In a break from past practice, Rumsfeld did not speak to reporters traveling with him on the 13-hour flight to Baghdad. Before he left Washington he met behind closed doors with Senate Majority Leader Bill Frist and about 15 other Republican members of the Senate to discuss the administration's $72 billion ( Ђ 57.95 billion) supplementary budget request, Ruff said.

Rumsfeld also raised with the senators the subject of the global war on terrorism. Ruff said he told them that rising concerns about Iran, with its nuclear ambitions and verbal threats against Israel, make it all the more important for the United States to succeed in Iraq and Afghanistan, reports the AP.