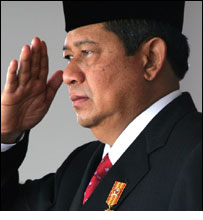 Indonesia's president called on foreign governments to continue aid to the Palestinian government, saying the ruling Hamas party should be encouraged to resolve its problems with Israel.

"Give Hamas a chance to solve the Palestinian problem," Susilo Bambang Yudhoyono was quoted as saying Wednesday by the national news agency Antara. "Don't add to their problems by stopping aid to them."

Israel, the U.S. and European Union have cut off much of the funding to the Palestinian Authority since the Islamic militant group Hamas won parliamentary elections in January, calling it a terror organization, reports the AP.