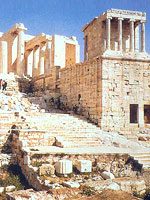 Riot squads fired tear gas Tuesday to disperse demonstrators who threw gasoline bombs and rocks as they tried to break through a police blockade set up to prevent a few thousand protesters from marching to the buildings where U.S. Secretary of State Condoleezza Rice was to meet the Greek foreign minister and prime minister.

The clashes broke out as Rice entered the Foreign Ministry a few hundreds meters (yards) away. About 3,000 people gathered in two separate rallies that merged in a march. One was organized by the Communist Party and another by anti-globalization activists. They were timed to coincide with Rice's meetings with Dora Bakoyannis and Costas Caramanlis in and around central Syntagma Square, reports the AP.