The Indonesian president left Tuesday for the Middle East where he will promote investment opportunities in the power sector and other industries in Indonesia, the world's most populous Muslim nation. 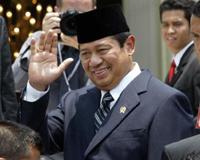 Indonesia, a sprawling nation of 220 million people, desperately needs funds for infrastructure projects, including a deal reached over the weekend with Chinese firms to develop coal-fired power plants.

Money also will be needed for ports, turnpikes and other construction projects, Indonesian officials told The Jakarta Post ahead of the trip.

"We will present all our proposed projects and deals that they might be interested in, including the (coal-powered) plants."

State Minister for State Enterprises Sugiharto told the paper Indonesia hoped to raise some US$8 billion by offering investors sharia or sukuk bonds, reports the AP.