Suspected Tamil Tiger rebels in a minivan opened fire on soldiers when their vehicle was blocked at a checkpoint in northern Sri Lanka, drawing return fire that killed the driver, the military said Tuesday. 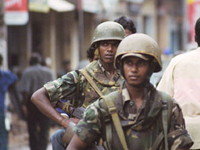 The driver of the minibus ignored a stop sign and drove past an initial checkpoint, Samarasinghe said. Soldiers at a following checkpoint were alerted, and they put up roadblocks that made the driver to stop.

The passengers of the bus then opened fire, and the soldiers retaliated, killing the driver, he said.

The remaining occupants of the minibus fled, and soldiers later found three hand grenades in the vehicle, he said.

The pro-rebel TamilNet Web-site reported the incident, but said it was a private bus. There was no independent account.

The latest bloodshed was part of growing violence that has left at least 81 people dead this month, 43 of them soldiers or police, putting the country's four-year-old cease-fire in jeopardy.

The rebels last week backed out of the latest round peace talks scheduled that were to start Monday in Geneva, citing attacks on ethnic Tamil civilians and other disputes with the government.

The Tamil Tigers demand a separate Tamil homeland and accuse the Sinhalese-dominated government of discrimination, reports the AP.