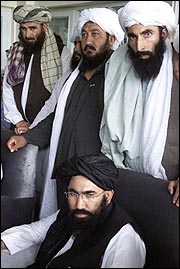 Five Taliban militants and one policeman were killed in a two-hour battle in southern Afghanistan, a government official said Tuesday.

The gunfight started late Monday and continued into Tuesday morning, leaving five Taliban and one policeman dead, Khan said. Two policeman also were wounded before the militants fled on foot into the mountains, reports the AP.