Prime Minister Abdullah Ahmad Badawi says he probably won't build glittering new cities because he wants to avoid any debt burden, a stance that contrasts with his predecessor's penchant for expensive, high-profile projects. 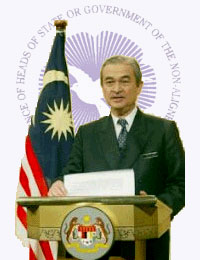 Abdullah said he was more interested in doing what is right for the country than in boosting his popularity, Bernama national news agency reported Tuesday.

"Never mind that I may not build great monuments or glittering cities," Bernama cited Abdullah as telling business leaders at the Kuala Lumpur Business Club dinner late Monday. "I am told this will be popular and will grease the wheels of our economy."

Abdullah's spending policies are markedly more conservative than those of his predecessor. Mahathir Mohamad favored investing in massive infrastructure projects, including the Petronas Twin Towers in Kuala Lumpur, once the world's tallest buildings, and Putrajaya,  a former oil plantation and now Malaysia's administrative capital.

The prime minister indicated that he has come under pressure from the private sector to boost spending and hand out more government contracts to local firms, especially in construction, the New Straits Times reported.

The administration's latest five-year plan proves the government is "not averse to spending," Abdullah reportedly said. "But if my economic policy is only about tax and spending without any thought given to structural changes, what will I leave for future generations?"

One of Abdullah's first decisions when he took over as prime minister in October 2003 was to shelve a massive railway project that would have cost the government 14.5 billion ringgit (US$4 billion; Ђ 3.2 billion).

"I don't want to leave a debt burden or contingent liabilities ... I don't want us to succeed today so that our future generations have to pick up the tab," he told the assembled executives.