President Martin Torrijos announced plans for the biggest expansion of the Panama Canal since it opened in 1914, making way for huge new container ships that can carry twice as much cargo. 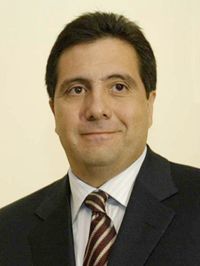 In a speech televised Monday evening, Torrijos said the US$5.3 billion ( Ђ 4.3 billion) expansion, which was approved by the canal's board of directors but must still be given the okay by voters in a national referendum, was "the most important decision about the canal and its role in the 21st century."

"The Panama Canal route is facing competition," Torrijos said. "If we do not meet the challenge to continue to give a competitive service other routes will emerge that will replace ours. It would be unforgivable to refuse to improve the capacity of the waterway."

The project calls for the construction of a third set of locks of water chambers that will allow the large "Post-Panamax" class of cargo ships to use the 80-kilometer (50-mile) waterway between the Atlantic and the Pacific oceans.

Torrijos said information on the project will be made available to the public to spark a long debate before the referendum, expected later this year. Recent polls indicate that a majority of Panamanians favor the expansion.

Opponents of the project say it is unnecessary and risky because it is based on projections of maritime trade and the economy. They have proposed building a mega-port near the Pacific end of the canal, at one-tenth of the cost, or about US$600 million ( Ђ 485 million).

The cost of the construction in Torrijos' plan would be financed through canal fees and some bank investments without risking government social programs, he said.

The president, whose father, Omar Torrijos, negotiated the 1979 treaty that eventually gave Panama total control over the canal, appealed to Panamanians to support the expansion.

The government's determination to widen the canal is fueled by fears that newer, larger ships will seek other routes between the Atlantic and the Pacific, diminishing the income-generating capacity of the route across the Panamanian isthmus.

The Torrijos government also is counting on an economic windfall that would come from an estimated 7,000 jobs during the five-year construction.

The canal, 32 meters (105 feet) above sea level at its highest point, uses a series of parallel locks to lift ships to Lake Gatun for the transoceanic passage.

The additional locks would require a system that retains part of the water now dumped into the oceans as the ships are lowered or lifted, reports the AP.