Anti-war organizers scrambled Monday to rearrange protests against a one-day visit to Athens by U.S. Secretary of State Condoleezza Rice. 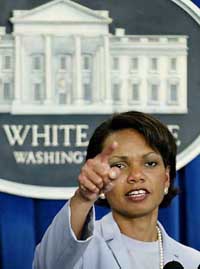 The small but influential Greek Communist Party, or KKE, said it would hold a candlelit anti-war vigil in central Athens on Monday night ahead of her visit.

Rice will meet with Prime Minister Costas Caramanlis and Foreign Minister Dora Bakoyannis during her visit.

The Foreign Ministry announced the new date on Sunday - which was Orthodox Easter in Greece and the country's biggest holiday - prompting protesters to reschedule their demonstrations.

Anti-American sentiments run high in Greece. Public opinion is strongly opposed to the war in Iraq and any possible U.S. military strike on Iran over its alleged nuclear weapon program.

"A few days after the Resurrection, the foreign minister of the USA comes to Athens as a messenger of war," Alekos Alevanos, leader of the small left wing opposition party Synaspismos, said Monday.

Rice was "persona non grata" in Greece, he said.

A huge police presence - as many as 8,000 officers - will provide security during Rice's visit, senior police officials said at the weekend.

The foreign ministry gave no reason for changing the date of Rice's visit but it was widely seen as an attempt to limit the size _ and impact _ of anti-war protests, with the capital still unusually quiet Easter Monday.

Most anti-American protests in Athens are vocal but peaceful, involving only minor skirmishes with police, the AP reports.

But in 2004, then U.S. Secretary of State Colin Powell canceled a trip to Greece during the Summer Olympic Games, following violent protests against the war in Iraq.