France is prolonging anti-bird flu measures in a zone hit by the virus, after two more dead swans tested positive for the virus' H5 subtype, the Agriculture Ministry said Friday. The test results were confirmed Thursday night, and further examinations were expected to determine whether the birds were infected with the deadly H5N1 strain. 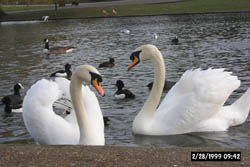 The swans were found this week in Saint-Paul-de-Varax in the Ain region of southeast France , some 45 kilometers (30 miles) from the city of Lyon . The Ain is the epicenter of French efforts to combat bird flu, recording 63 of the 64 cases of H5N1 found so far this year in tests on more than 14,000 dead wild birds in France . The other case was in the Bouches-du-Rhone region further south.

Measures to prevent and monitor the spread of bird flu that were already in place in the Ain are being adapted following the two new H5 cases, and they will remain in place for at least a month, a ministry statement said. "The recent discovery of two infected swans show that it is necessary to remain vigilant and to maintain bio-safety measures in the infected zones," the statement said, reports the AP.