Norwegian peace brokers tried on Friday to save endangered peace talks as two policemen and a village guard were killed in separate attacks blamed on Tamil Tiger rebels in northeastern Sri Lanka and a man died when angry villagers attacked Tamil homes. The rebels and government were scheduled to meet in Geneva on April 24-25, but the leader of the Tamil Tigers' political wing, S.P. Thamilselvan, said Thursday they would boycott the talks because of escalating attacks on ethnic Tamils. 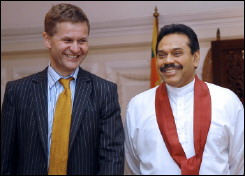 Ulf Henricsson, head of a European cease-fire monitoring mission, met with the Tamil rebel leadership in the rebel stronghold, Kilinochchi, on Friday to resolve a dispute over how to transport rebel commanders to their headquarters for an internal meeting, which they insist on having before any talks with the government. The truce monitors are trying to facilitate transport to enable peace talks soon, said Helen Olafsdottir, a spokeswoman for the Sri Lanka Monitoring Mission.

In the latest violence Friday, two policemen were killed in a mine blast in Serunuwara village in Trincomalee district, 215 kilometers (135 miles) northeast of the capital, Colombo, local police chief Nihal Samarakoon said. Two other policemen were injured in the attack, he said. Hours earlier, suspected rebels set off an anti-personnel mine in the same neighborhood, killing a village guard and wounding another policeman, Samarakoon said.

A civilian, believed to be an ethnic Tamil, was killed when angry villagers heard about the first blast and attacked Tamil homes, a police officer in the area said, speaking on condition of anonymity due to policy. Meanwhile, in the northern area of Jaffna , troops recovered a cache of mines, grenades, detonators, explosives and ammunition the largest amount since the government and rebels signed a Norway-brokered cease-fire in February 2002 the military said.

The military said the weapons and ammunition, found in the backyard of an abandoned house, may have been hidden by the Tamil Tigers, who have been blamed for a series of mine explosions since April 8. The Geneva talks were meant to salvage the cease-fire, which is faltering due to escalating violence in which more than 59 people 36 of them government soldiers and police have been killed since early April.

On Thursday, Thamilselvan told Norwegian peace envoy Jon Hanssen-Bauer that the Tigers would not attend the second round of talks. The rebels accused the military and armed anti-rebel groups of killing ethnic Tamil civilians and rebels in the Tamil-majority north and east. The government denies the charge.

The Tigers have fought the government since 1983, demanding a separate Tamil homeland and accusing the Sinhalese-dominated government of discrimination. More than 65,000 people were killed in the fighting before the cease-fire, reports the AP.