Indian envoy hopes democracy will be restored in Nepal

An Indian envoy dispatched to Nepal in the wake of violent anti-king protests said Friday he expects a "major announcement" to be made soon on restoring democracy in the Himalayan kingdom. "It is our hope and expectation that perhaps by the end of the day some major announcement will be made," Karan Singh said after briefing Indian Prime Minister Manmohan Singh on his recent visit to Nepal . 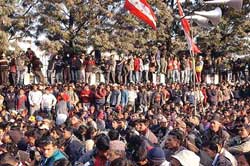 Indian envoy hopes democracy will be restored in Nepal

"We are hoping that there will be some major step toward reinstating democracy," Karan Singh told reporters. He gave no other details. Singh returned Thursday from Nepal , where he met with embattled King Gyanendra, apparently to urge him to restore democracy in the wake of the unrest in Nepal . India , a regional power, has considerable influence over its smaller neighbor, Nepal .

More than two weeks of often violent protests and a general strike against palace rule have paralyzed the Himalayan country, leaving cities short of food and fuel and Nepal at its most volatile since Gyanendra seized power 14 months ago, reports the AP.