Center-left leader Romano Prodi prepared Friday for his return to power, shrugging off Premier Silvio Berlusconi's refusal to concede defeat in Italy 's election and facing the first dispute within his wide-ranging coalition. The squabbling between two center-left allies over who should become speaker of the lower house of parliament posed the first test to Prodi's leadership and renewed questions over the bloc's cohesion. 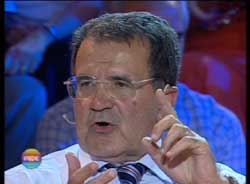 "It's a test that comes very soon, when we are still far away from the official mandate," wrote financial daily Il Sole 24 Ore. Top newspaper Corriere della Sera described the dispute as an "emblematic mess." Squabbling to get the post, which is the country's third-highest office, are Massimo D'Alema, the president of the Democrats of the Left party, and communist leader Fausto Bertinotti.

D'Alema says the post should be given to him in recognition of the size of his party, the coalition's largest. Bertinotti had put forth his candidature weeks ago, and Prodi might be wary of disappointing the ally that toppled his first government years ago. The dispute broke days after a top court confirmed Prodi's razor-thin victory in the lower house of parliament. It pits two heirs to what was once the West's largest Communist Party: The Democrats of the Left have gone mainstream center-left, while Communist Refoundation still proudly displays the hammer and sickle in its flag.

"In a couple of days I will make the decisions that are required of me," Prodi said Friday, a day after receiving a letter by the Democrats of the Left demanding that he solve the matter. But the dispute gave Prodi a taste of what might await him.

The center-left coalition is made up of two mainstream center-left parties and a group of smaller formations ranging from communists to Catholics to secular radicals. Prodi, a former premier and EU chief, has downplayed potential divisions. But many analysts have expressed doubts that his government might be long-lasting and effective in tackling the country's economic woes.

Meanwhile, Prodi said that Tommaso Padoa Schioppa, a former board member of the European Central Bank and a highly respected economist, might be the next economy minister, after La Repubblica daily had published a report a day earlier. "Certainly it's one of the hypotheses, a serious and well thought-out one," he said, adding that nothing had been decided yet. "The government must last, therefore serious sounding out is required."

The comments came as Prodi was continuing talks over the formation of a government, even though it will be weeks before he can take over due to institutional procedures. Berlusconi has still not conceded, despite calls from some of his own allies to recognize his rival's victory. Prodi has dismissed Berlusconi's resistance as "sad," but said it would have no bearing on the next steps. "Democracy goes on anyway," he said, reports the AP.