Russia is not racing to join the World Trade Organization, and will enter the international trade body only when it has agreed on acceptable accession terms, a Foreign Ministry official said Friday. Fueled by high oil prices, Russia 's economic confidence is on the upswing, and Russian officials recently have argued that Moscow should not be pushed into joining the WTO on anything other than favorable terms. 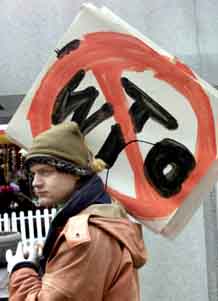 "The WTO is not a goal in itself, and it is not a question of the date by which we join, but the quality (of the agreement). Russia intends to join the organization when doing so will answer its interests," the director of the department for economic cooperation, Andrei Kondakov, was quoted as saying by the Interfax news agency.

"It is not about 'do we join or don't we join?' but what price we pay for an entry ticket," he said. Russia has signed agreements with the European Union, China and Japan among others, but has yet to reach deals with the United States , Colombia and Australia .

In March, President Vladimir Putin expressed frustration at the pace of negotiations, charging the U.S. with coming up with ungrounded demands that were hindering talks.

Russia has sought to join the WTO since 1994, and has embarked on a major set of legislative reforms to fall in line with WTO rules, including introducing a new customs code. Sticking points in negotiations with the U.S. have been the enforcement of anti-piracy laws and financial services. U.S. senators have said Russia's democracy record and the Kremlin's stance in the Iranian nuclear crisis would influence the U.S. Congress as it considers Moscow's bid to join the 149-member global commerce body, reports the AP.