Fire at Myanmar Embassy in Malaysia: one man killed

A fire at Myanmar 's embassy in Malaysia on Friday killed one man, police said. The cause of the blaze, which damaged part of the building, was not immediately clear. Police are investigating how the fire broke out, said district police chief Hasnan Hassan. He declined to identity the dead man or say whether arson was a possibility. 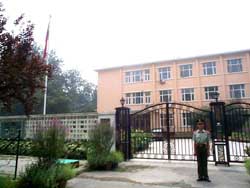 Fire at Myanmar Embassy in Malaysia: one man killed

Embassy officials couldn't immediately be reached for comment. Witnesses said the blaze, which was put out by firefighters who rushed to the embassy, seemed to have started inside the building. The embassy was rebuilt in 2004 after three men armed with firebombs, machetes and an ax set it ablaze. Police arrested the alleged attackers and an accomplice, all members of Myanmar 's Rohingya ethnic Muslim minority.

The embassy is also frequently targeted by demonstrators calling for democratic reforms in military-ruled Myanmar . Security at embassies in Malaysia was boosted after the Sept. 11, 2001 , terrorist attacks in the United States . There have been several security scares since then, including a pipe bomb thrown at the Australian High Commission in 2004 and suspicious packages sent to more than a dozen mainly Western embassies last October in an apparent wave of hoaxes, reports the AP.