An explosion tore through the basement of a building in the center of the southern Russian city of Cherkessk on Friday, killing one person and gravely injuring three more, police said. According to a preliminary investigation, the blast was caused by an explosive of an undetermined type, regional Interior Ministry spokeswoman Fatima Kardanova said. 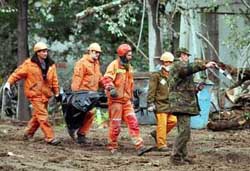 All 25 apartments and ground-floor shops in the three-story building were evacuated, including the apartment occupied by Islam Burlakov, a regional Supreme Court judge, Kardanova said. The Federal Security Service, the main successor to the Soviet KGB, was involved in the investigation, she said.

The republic of Karachayevo-Cherkessiya, located in the Russia's troubled North Caucasus, has been plagued by frequent contract murders and other violence, some linked to rivalries between local criminal clans and some spilling over from Chechnya to the east, reports the AP.