Israel is preparing to reoccupy the Gaza Strip if the Hamas-led Palestinian government doesn't halt rocket fire from the area, a senior military commander said in published remarks Friday. Maj. Gen. Yoav Galant, head of Israel 's southern command, said he is considering a range of options, including the possibility of re-entering Gaza . 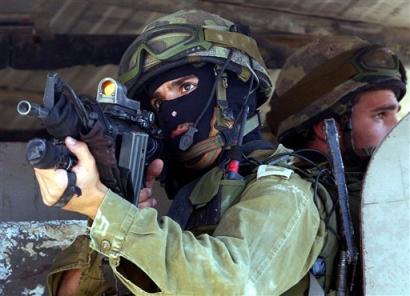 "We're talking about more aggressive military activity," Galant told the Maariv daily. "If the price we have to pay becomes unreasonable as a result of increased (Palestinian) attacks, then we shall have to take all steps, including occupying the Gaza Strip," Galant said. "It could be anything from a partial occupation of the Gaza Strip to a full occupation," he said, adding that his plans have been approved by senior officials, including Defense Minister Shaul Mofaz.

Israel withdrew from Gaza last summer, ending 38 years of military occupation. Since the pullout, Palestinian militants have continued to fire homemade rockets into southern Israel on a daily basis. The rockets have not caused any serious casualties, though they have been deadly in the past. Israel has responded to the rocket attacks with airstrikes and artillery fire on suspected launch sites. Israeli security officials concede it is very difficult to halt the primitive weapons, which fly just 15 to 20 seconds and are hard to detect.

Israel already has made two brief incursions into Gaza to search for explosives. But defense officials said the odds of a large-scale operation or full occupation are slim because of financial and political constraints. "I wouldn't want to reach that situation, but if it's forced upon us we have a plan to occupy the strip," Galant said. "We are in advanced stages of preparing forces for readiness. There is a practical plan and there are forces which are designated for specific operations and are training for them."

Israel is reluctant to go back into Gaza after spending hundreds of millions of dollars to withdraw and overcoming staunch political opposition. In addition, Israel is pleased with the international pressure on Hamas and fears military action could jeopardize that. Galant said "intolerable" nonstop attacks, or the use of longer-range and more powerful weapons such as Katyusha rockets, could prompt a large-scale ground operation. The Islamic Jihad militant group recently fired a Katyusha into Israel , causing no damage.

Galant's threat of a re-occupation could in part be aimed at an Israeli public outraged over the rocket fire. It could also be meant to put pressure on Hamas to halt the attacks. Although Hamas has been observing a truce with Israel for more than year, it has said it will not prevent other groups from carrying out attacks. Hamas said a suicide bombing in Tel Aviv this week was justified.

Israel says it holds Hamas responsible for the violence, though it is holding off direct military action against the group for the time being. "In the new reality the military acts against all the terrorist organizations, except Hamas, which is restraining itself," Galant said. Hamas defeated the long-dominant Fatah Party in January legislative elections, and its new Cabinet was sworn into office late last month, reports the AP.