EU official are upset by slow democratic reforms in Myanmar

A top European Union official expressed frustration Friday at the slow pace of democratic reform in Myanmar , and urged Asian nations to keep pressure on its military rulers. As a member of the Association of Southeast Asian Nations, Myanmar should be forced to abide by the "same rules and the same behavior as the rest of the countries of ASEAN," said Javier Solana, the EU's foreign policy chief. 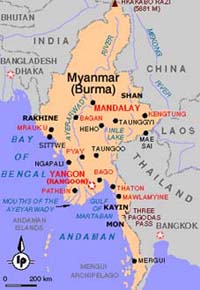 EU official are upset by slow democratic reforms in Myanmar

Myanmar , also known as Burma , has been a pariah to the West since 1990, when its military rulers refused to hand over power to democracy leader Aung San Suu Kyi's party after it won elections. The junta says it is implementing democratic reforms and drafting a constitution, but there has been little evidence so far to back those claims.

ASEAN foreign ministers meeting on Indonesia 's resort island of Bali insisted this week that, while they were unhappy with Myanmar , there was little they could do. But Solana said this was not the time to give up.

"We share their frustration," he said. "But we think that together we have to se how we can get Myanmar evolving in the direction it was supposed to be evolving." Myanmar has been under military rule since 1962, and the current group of generals took power in 1988. Suu Kyi, who has spent nearly 10 of the last 16 years under house arrest, is one of hundreds of political prisoners, reports the AP.