A senior opposition lawmaker who formerly supported Britain 's intervention in Iraq believes it is time for the country to withdraw its troops, according to an article published Friday. Michael Ancram, formerly the Conservative Party's spokesman on foreign affairs, said that Iraq was effectively embroiled in a civil war, according to the article in The Daily Mail newspaper. 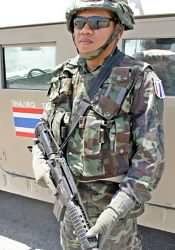 "We have no place in Iraq in a civil war. We cannot and must not take sides between Sunnis and Shias," Ancram wrote. He questioned whether British troops any longer were accomplishing anything in Iraq . "Having set out at the beginning to be part of the solution it is now sadly evident that we are in danger of becoming the problem." The British military, which has about 8,000 troops in Iraq , has reported 104 deaths in the country, reports the AP.