Poland 's Prime Minister on Wednesday urged the European Union to adopt a common energy policy to secure its energy supplies and to coordinate talks with suppliers. "This policy ... is a top priority for us," Kazimierz Marcinkiewicz told reporters after meeting Bulgarian counterpart Sergei Stanishev. "Now each country independently negotiates with its suppliers, which rules out the possibility for a common position, while adopting a common strategy as part of the European Union's common foreign policy will give us more security." 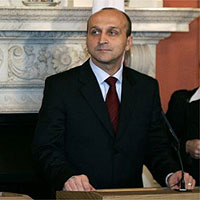 EU member Poland , as well as EU aspirant Bulgaria and many other European countries, are heavily dependent on Russian energy supplies and have been seeking ways to diversify supplies after the recent Russian-Ukrainian gas price dispute. Marcinkiewicz has repeatedly appealed for a European energy security pact as a tool to guarantee gas and oil deliveries.

Stanishev, the Bulgarian Prime Minister, said Bulgaria was also interested in securing diversified energy supplies, but added that "each country should seek its own proportions and balances." Stanishev said Bulgaria and Poland were both interested in the Nabucco project a plan for a natural gas pipeline that would run from Turkey through Romania , Bulgaria and Hungary to Austria , linking these countries with gas fields in Iran and Azerbaijan .

The 3,300-kilometer (2,050-mile) pipeline project run by Bulgaria 's state-run gas provider Bulgargaz , Turkey 's Botas , Romania 's Transgaz , Hungary 's MOL and Austrian OMV Gas is at a preparatory stage. Construction could begin as early as 2008, and in that case exploitation of the pipeline could start in 2011. Bulgaria has also been under pressure from Russian gas giant Gazprom to accept an early review of its gas delivery contracts, which normally would expire in 2010. A change would lead to a 30-40 percent price increase for Bulgaria , experts have said, and the Balkan country has so far refused to review the arrangements.