Scores of Australian troops began arriving in the Solomon Islands Wednesday to restore peace after rioters and looters laid waste to much of the capital Honiara 's Chinatown neighborhood in protests sparked by the election of a new prime minister. Australian Prime Minister John Howard ordered 110 soldiers and an extra 70 Australian Federal Police officers flown to the strife-torn South Pacific nation. New Zealand also was sending an extra 30 soldiers and 20 police and Fiji was sending about 20 police. 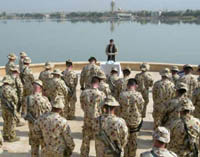 Scott Bolitho, a spokesman for Australia 's Department of Foreign Affairs and Trade, said the first Australian troops who were armed and wearing combat fatigues touched down in Honiara early evening. They were expected to begin patrolling the city almost immediately but defense officials did not immediately release details.

Bolitho also said Canberra was offering seats on military planes returning to Australia to any of its citizens or those of Britain , New Zealand , the United States or Canada wishing to leave the Solomons. Howard said the fresh deployment would "represent an immediate and needed injection of additional security forces to the Solomon Islands ."

The response came after at least 17 Australian and two New Zealand police were injured in violent clashes on Tuesday with protesters opposing the election of a new prime minister, Snyder Rini, in the aftermath of April 5 parliamentary elections. Late Wednesday afternoon, Solomons' Governor General Sir Nathaniel Waena went on national radio to appeal for calm and signed off on a police-ordered 12-hour curfew from 6 p.m. in Honiara .

The order also banned the sale of alcohol in much of the capital and gave police the power to arrest people on suspicion of inciting violence and hold them up to seven days without charge, an Australian Federal Police spokesman in Honiara said on condition of anonymity, citing force practice.

The riots began outside Parliament House in the capital, Honiara , but swiftly moved to Chinatown , home to a number of businesses thought to be supportive of Rini's government. More than 50 Chinese shop owners were evacuated by Australian officers as rioters set fire to their businesses late Tuesday, federal police said.

" Chinatown was an area of specific targeting by the mobs," he told The Associated Press in a telephone interview. "That's not unusual to the extent that the Asian or the Chinese population here do own most of the retail and commercial businesses." Government spokesman Johnson Honimae said about 90 percent of Chinatown had been destroyed.

"Mobs and looters have been hurling rocks and bricks at passing patrol police vehicles," Honimae said. A new hotel in the city and nearby cars also were torched in continuing violence Wednesday.

By Wednesday afternoon, central Honiara was largely deserted a burning building the only sign of the morning's riots. A lone man with a bullhorn rode on the hood of a passing police car appealing for locals to return home. The Solomons' new prime minister is perceived as having close links with the corruption-tainted administration of his predecessor Sir Allan Kemakeza. Rini was Kemakeza's deputy prime minister.

Protesters also fear his election was engineered by Chinese businessmen in Honiara seeking to increase their influence in the Solomons' Parliament. Alfred Maesulia, the head of the government information unit, said told SIBC that Rini was being kept in a secret location and that it was "highly unlikely" he would be formally sworn in Wednesday, as previously planned, reports the AP.