Police in Italy and France on Wednesday arrested eight Algerians and two Italians as part of an anti-terror operation, police in the southern Italian city of Naples said. Those arrested in Italy were picked up in Naples and the nearby city of Caserta , and in Milan , police said. 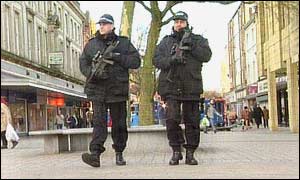 Police and judicial officials in France said counterterrorism police in the southeastern city of Marseille had arrested five men suspected of being members of the Salafist Group for Call and Combat, or GSPC, a militant Algerian Islamic group said to have links to al-Qaida.

The prosecutors' office in Naples said in a statement that the men all were suspected of "belonging to a criminal organization dedicated to procuring and falsifying identity documents and residency permits at an international level, and of aiding illegal immigration."

The statement, which was carried by Italian news agencies, said the men had been arrested following an investigation that had revealed the existence of an organization dedicated to recruiting people and raising finances "in an area connected to subversive Islamic organizations."

Police in Naples declined to give details pending a news conference in the city later in the day. The ANSA news agency said the arrests were the result of a yearlong investigation conducted by the police forces of the two countries, reports the AP.