Two roadside bombs exploded in Baghdad Wednesday, killing at least two bystanders and wounding 15 people, as gunmen in the capital killed at least six people in targeted shootings, police said. One bomb targeting a police patrol blew up in the western neighborhood of Harthiya, killing one civilian and injuring 11, including two policemen and an Iraqi soldier, police said. 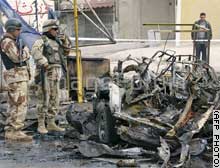 The other exploded near the al-Kindi hospital in eastern Baghdad , killing one civilian and wounding four others, police said. Gunmen in the southern neighborhood of Dora went on a shooting rampage in three separate attacks, killing a construction worker, trade ministry employee and three power plant workers who had been snatched from their car an hour earlier, police said. At least two cars were stolen in the attacks. Police were investigating whether the attacks were linked.

In west Baghdad , gunmen killed a medic as he walked from house to house in the Amariyah district administering vaccinations, police said. A car bomb exploded in the city of Baqouba , wounding two civilians. Police had earlier received a call about a body in the car, which they retrieved moments before the blast, officials said.

In the southeastern suburb of Rustamiyah, police discovered five bodies of Iraqis, handcuffed and blindfolded. Late Tuesday, police found 11 other corpses in various parts of the capital. Also late Tuesday, five foreigners, including an Egyptian, were killed as they drove near a village 50 kilometers southwest of Kirkuk in northern Iraq , police said. Officials declined to identify the nationality of the other four victims, reports the AP.