A monthlong outbreak of cholera has killed 21 people and sickened 253 in mainland Tanzania and the semiautonomous Zanzibar archipelago, officials said Wednesday. Twelve people died in the past four days and 115 others were taken to hospitals in Tanzania 's commercial capital, Dar es Salaam , said City Council spokesman Gaston Makwembe. 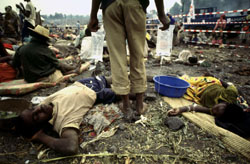 Nine more people have died and 137 others have been sickened in the past month in this Indian Ocean archipelago off of the coast of Tanzania . Those infected were in special government camps designed to curb the disease, Zanzibar 's Minister of Health Sultan Mugheiry said.

Cholera is transmitted through contaminated water and is linked to poor hygiene, overcrowding and bad sanitation. Symptoms include diarrhea and vomiting, which can kill unless treated quickly. Last month, Zanzibar banned the sale of food and juice on the street and closed some local restaurants to stop the disease.

"We are confident that the situation is under control," Mugheiry said. A 1997 outbreak killed 124 people and sickened 1,100 in Zanzibar , which has a population of 1 million. Cholera erupted after heavy rains in the region hit by a drought that has hurt farmers across East Africa , leading to severe food shortages in Tanzania , Kenya , Somalia , Ethiopia and Djibouti , reports the AP.